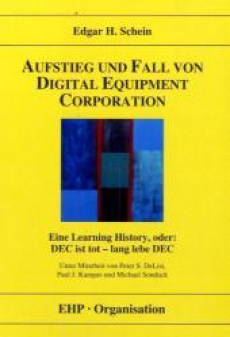 Edgar H. Schein is a Sloan Fellows Professor of Management Emeritus at the Sloan School of Management at the Massachusetts Institute of Technology.

The rise was terrific: after its founding in 1957, Digital Equipment Corporation, or DEC for short, quickly became the second-largest computer producer behind IBM. The pioneering company made many significant innovations. The cause of entrepreneurial and technological creativity was above all the unique culture of the organization, which was shaped by the founder Ken Olsen. However, strong culture as a source of competitive advantage soon became a risk factor: it was the one that prevented the company from adapting to new realities in the technology and business environment, significantly contributing to the decline of DEC: In 1998, the company was acquired by Compaq.

The rise and fall of Digital Equipment Corporation is being tackled by Edgar H. Schein in his new book "DEC is dead, long live DEC", which will be published in German translation in February 2005. Schein, who is regarded as the founder of modern organizational psychology, with his latest work provides a comprehensive case study on the phenomenon of corporate culture - a topic he has been dealing with for many years of research.

From 1964 to 1990, Schein was Professor of Organizational Psychology and Management at the Sloan School of Management at the Massachusetts Institute of Technology (MIT). With his groundbreaking research on organizational culture, the native Swiss is in a tradition that began at the end of the 1920s. While Henry Ford had still regarded the worker in the company as a "hired hand" and the superiors as a pre-thinker, the employee moved more into the center of attention. Employee motivation became the core topic of the Human Relations Movement.

The site is rebuilt after technical problems, please be patient!